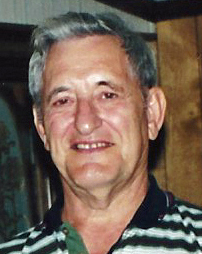 Bernard “Bernie” Perry lost his battle with cancer and Parkinson’s disease on Saturday, January 28, 2017.  Born on April 23, 1932 to Vern and Margaret (Miller) Perry, he lived a full, honorable, and beautiful life, enveloped in riches that made him most happy:  his family and friends.

At age 17, Bernard left Summerfield High School and enlisted in the U.S. Navy.  Upon graduation from the Great Lakes Training Center, he served 4 years aboard the U.S.S. Leyte and Roosevelt while travelling the world and in support of the Korean War.

Upon leaving the Navy, he returned to Petersburg, MI.  It was in Petersburg, that he spotted the love of his life, Marilyn R. Cline.  They were married on November 24, 1956 – a marriage that lasted for 53 years.  Together they raised six children on Bacon Road in Ottawa Lake, MI:  Deborah Perry (Toledo, OH), Gail (Tom) Kowalski (Temperance, MI), Cindy Perry Wood (Norwalk, OH), Kevin Perry (Ludington, MI), Tom (Veda) Perry (Brooklyn, MI), and Anthony “Tony” Perry (Lambertville, MI).

Bernard was employed by Tecumseh Products, Tecumseh, MI, and retired after 42 years.  He and Marilyn spent many years travelling and visiting family and friends; he loved music and dancing, gardening, and loved to cook and excelled in cream pies and soups of all kinds.  He also enjoyed motorcycling, bicycling, and, most of all, he loved family gatherings and helping with his 11 grandchildren:  Aaron (Renata) Kowalski; Adam (Stacey) Kowalski; Austen Kowalski; Lauren (Brad) Halka; Matthew (Krystle) Wood; Ben (Tony) Wood; Elizabeth (Christopher) Helland; Samantha Perry; Jack Perry; and Meg Perry.

Perhaps, Bernard will be remembered most for his talents as a machine repairman (very few motors he couldn’t fix), his carpentry skills, and his masterful millwork.  All his children, grandchildren, and many friends and extended family benefitted from the beautiful, wooden gifts of toys, bookcases, cabinetry, desks, shelves, jewelry armoires, and puzzles.

Bernard also enjoyed storytelling with his children and grandchildren – some were even true and some were laced with his great sense of humor and just enough truth to be believable.  He loved a good tease and to “get your goat.”  While not always welcomed, it was always done with affection and a great laugh afterward.

The family wishes to thank all the staff and residents at Blissfield Place, Blissfield, MI, where he made many friends and received exceptional care in his last years.  In lieu of flowers, the family is suggesting gifts to the Hospice of Lenewee County or the VFW Post 9656.

A memorial gathering will be held Sunday, February 5, 2017 from 1:00 p.m. until 5:00 p.m. in the Urbanski’s Bedford Funeral Chapel, 8300 Lewis Avenue,  Temperance, MI  where Military Honors will be conducted by his brothers from the Lambertville VFW Post 9656 at 5:00 p.m. Online Condolences may be shared at www.bedfordfuneralchapel.com .