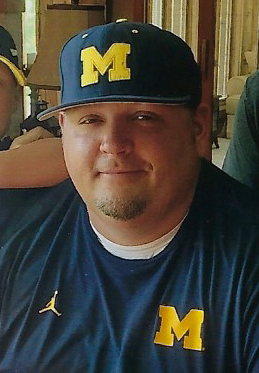 A 1997 graduate of Whitmer High School, he married his high school sweetheart, Stephanie Mrkva on June 11, 2005 and were together over 24 years. Chad received his Associate of Applied Science Degree in Nuclear Engineering Technology from Lakeland Community College in 2013.

An entrepreneur in the aluminum industry and an innovator in the casting process, Chad was the owner and operator of Rapid Cast Technologies, an aluminum prototype casting foundry which specializes in quick turnaround and hard to cast projects.

An amazing, caring, loving husband and father, he would do anything for his family. Chad would spend as much time as possible with them. They loved to go off road four wheeling Up North, taking them to sporting events and golfing. He was the type of man that would take the shirt off  his back for you; he was truly a good friend. An avid University of Michigan fan, Chad had a passion for coaching children, he coached for over 23 years in the Washington Junior Football League. Always up for a good time, he loved listening to music and became very good at brewing his own beer. Jack of all trades he become a great handyman even building his own bar and movie theatre in his basement.

Chad will be greatly missed by all who knew him.

He was preceded in death by father figure, Mark Cherry.

A special thank you to the nurses, doctors and staff of Toledo Hospital and Henry Ford Hospital.