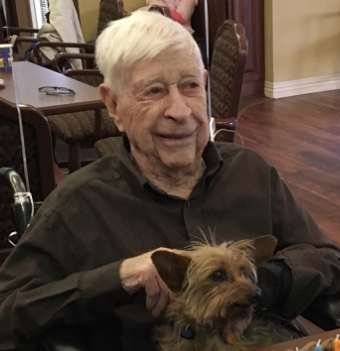 Charles Robert “Bobby” Carns, 97, of Sylvania, OH, peacefully passed away on December 12, 2020. He is survived by his wife of 74 years, Doris. Robert was born on March 31,1923 to Charles and Laura Carns in Toledo Ohio. After Bob graduated from Edinburg High School, he honorably served in the Army Air Corp as a tail gunner in B-29 Bombers in the Asian front, flying more than 100 missions over the Burma Hump. He served until the end of World War 2.

In 1945 he met Doris, the love of his life at a skating rink, where he was known for breaking the rules by doing backflips on his roller skates. Another Bob story features him walking up and down the stairs on his hands. Anything for a laugh. Bob and Doris were married on September 25, 1946.  Bob was an excellent father and disciplinarian keeping his boys firmly under control. He enjoyed teasing and spending quality time with his Grandson Eddie while in Alaska.

After returning from the war, he began working as a superintendent for Enterprise Roofing and Sheet Metal until he and Doris moved to Alaska in 1973.  A jack-of-all-trades, Bob and Doris had an adventurous life together — living and working in Alaska, Hawaii, Arizona, Florida, Ohio and Michigan. While in Alaska, Bob worked on the Alyeska Pipeline.  Upon moving to Honolulu, Hawaii he managed the Banyan Tree Plaza, a 26 floor apartment complex until retiring in 1995.

Once he retired, he enjoyed puttering in his garage, remodeling, creating stained glass projects and other hobbies.  He enjoyed spending time at the cottage on Wall Lake in Indiana which he built in the 1950’s with the help of friends and family.  His children and grandchildren along with many nieces and nephews have many fond memories of spending time with Bobby at the cottage.

Memorial contributions may be made in Bob’s honor to a charity of the donor’s choice. A private service for family is to be held at a future date. Arrangements entrusted to Urbanski’s Bedford Funeral Chapel 8300 Lewis Ave. Temperance, MI.