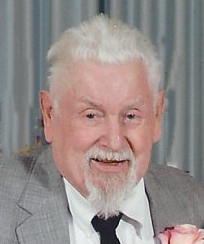 William and Othella (Schieber) Cadow. Cliff retired in 1984 from the Detroit Fire Department as

Battalion Chief. He was honored to receive the Medal of Valor for saving 2 children, Detroit’s

He was a member of the IAFF Local #344 Firefighters Union and The Boy’s Club of Detroit. Cliff served as a former secretary of the Fireman’s Fund Association in Detroit and was a co-founder of Sts. Peter & Paul Dad’s Club in Detroit. A longtime member of Our Lady of Mt. Carmel Catholic Keenagers. He was also a member of the Knights of Columbus Councils #192, OLMC #8902, and Erie VFW #3925.

Cliff was preceded in death by his wife of over 55 years, Louise (Scepanski) in 2002, his daughter-in-law, Shari Murphree, and his grandson, Jonathan Wynkoop.

He is survived by his loving children, Gordon (Barbara) Murphree, Maureen Danyi, Warren

Temperance where he will lie in state after 10:00 a.m. Burial will follow in the Church Cemetery

Donations in Cliff’s honor may be made to the Salvation Army or Hospice of Northwest Ohio.