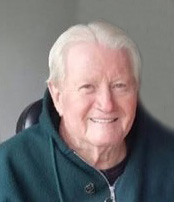 A graduate of DeVilbiss High School in 1945, Gene enlisted in the Army and served with the 82nd Airborne Division for two years. After returning home Gene went to work at the family restaurant, The DelRae alongside his father and later his wife and three sons.

Gene married Marguerite (Peggy Farmer) Christian on May 17, 1958. Together they  had three sons; Michael, Scott and Jon. After the DelRae closed Gene worked at the 19th Hole Tavern and later became the owner and manger until he retired in 2012.

Gene and Peggy enjoyed dancing and spending time at their cottage on Posey Lake with family and close friends. He was an avid sports fan and liked the Detroit Tigers, Michigan Football and NASCAR Racing.  Gene liked the many island parties and enjoyed watching the Michigan/Ohio State game at the 19th Hole Tavern.

Gene is survived by his three sons; Michael, Scott (Terry) and Jon Christian. He was preceded in death by his parents and his wife of 62 years Marguerite.

There will be a Celebration of Life on March 29, 2020. Funeral arrangements were entrusted to the Urbanski’s Bedford Funeral Chapel 8300 Lewis Ave. Temperance, MI 48182.