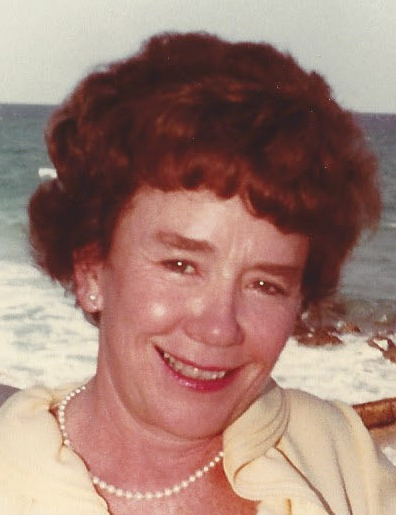 In 1948, Gerry married her college sweetheart,
Richard MacAdams, and moved to Toledo,
Ohio, where her husband was employed as an
engineer with the Pure Oil Company.

She
worked occasionally as a substitute teacher
until the youngest of their three children
started school, whereupon she embarked on a
full-time career in the Toledo Public Schools for
over 20 years, teaching English and Business
courses at Whitney Vocational High School and
at the Waite High School Skill Center. Gerry
worked tirelessly not only to teach her students
well, but to place them in good jobs and to help
them pursue higher education.

Gerry was an activist all her life, particularly in
the areas of women’s rights, politics, and
religion. She belonged to the AAUW, Bedford
Township Republican Club, and St. Anthony of
Padua Catholic Church (Temperance, MI), and
served each with great dedication and
generosity. As an ardent Catholic, she was
especially devoted to St. Anthony Church, not
only as a volunteer on many committees, but as
a daily communicant from the time she retired
from teaching until falling ill with Alzheimer’s
Disease in 2001.

When Gerry wasn’t working, she loved to
travel, and visited all but 11 of the 50 US States
plus most of Western Europe. She particularly
relished her stays in Northern Ireland and
England where she had relatives; the religious
shrines at Knock and Fatima; and Marco Island,
Florida. Canada and Mexico were her favorites
at Christmas-time. In addition to her husband, Richard
MacAdams, Gerry is survived by her children,
Monica MacAdams (Michael Smith), a Lawyer of
Washington, DC; Michael MacAdams (Maria), a
Physician of Lubbock, TX, and Melanie
MacAdams (Michael Chambers) a School
Teacher of San Jose, CA; by her grandchildren,
Stephanie Stasik (Chad) of San Antonio, TX, and
Ashley Elitt (Michael) of New York City; by her
great-grandchildren, Nicholas and Katharine
Stasik and William and Elizabeth Elitt. Gerry
was pre-deceased by her brothers George and
Eugene and Ron Mitchell and by her sister,
Frances Mitchell Reid.

In lieu of flowers, the family asks that
contributions in Gerry’s memory be made
either to St. Anthony Church or to the
Alzheimers Assn. Online condolences may be shared at www.bedfordfuneralchapel.com