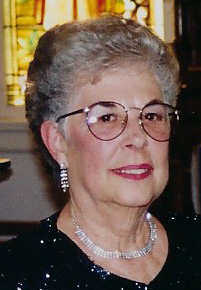 Hattie Louise “”Lou”” Olender, 89 years, of Lambertville, MI passed away peacefully December 4, 2018 in Aspen Grove Assisted Living under the care of ProMedica Hospice. One of nine children, Lou was the daughter of Hugo J. and Grace Mary (Phillips) Globig. She was born at home in the old North End on September 28, 1929.

An accomplished seamstress, she worked for the since closed, B.R. Bakers Men Store as a suit maker. Lou graduated from Harriet Whitney High School in 1949. After graduation, Lou met and married the love of her life Charles (Chuck) Olender on May 26, 1951 in St. Vincent DePaul Catholic Church in Toledo, OH and in the coming years were blessed with two children.  In the early years, they built a life together with their family in Point Place, but in the mid-80’s they moved to the Lambertville, MI area,  where they resided until their death. As a youth, Lou was a member of the old Riverside Baptist Church where she sang in the choir. Now a member of BridgePoint Church (formerly First Baptist Church of Temperance) where she was part of their choir also. She had a beautiful voice and sometimes sang at weddings. Lou was a Cub Scout Den Mother and a Girl Scout Leader. She also was a creative craftsperson who taught many craft lessons to women’s groups. Lou enjoyed volunteering her time for the American Lung Association and the Red Cross. Thru Chuck, she was a longtime member of the Local 8 Retirees Club.

We would like to thank the staff of Aspen Grove for their care and support of mom these last two and half years. A special thanks to Lexi, Mandy, Denise, Jillandra, Olga, Brenda and others for the care and compassion shown these last few weeks, it is truly appreciated.

Visitation will be held on Tuesday, December 11, 2018 from 2:00 p.m. until 7:00 p.m. in the Urbanski’s Bedford Funeral Chapel 8300 Lewis Ave. Temperance, MI. where the funeral service will take place on Wednesday, December 12, 2018 at 10:00 a.m. Burial will follow in Mt. Carmel Cemetery, Toledo, OH. Memorial donations may be made to ProMedica Hospice