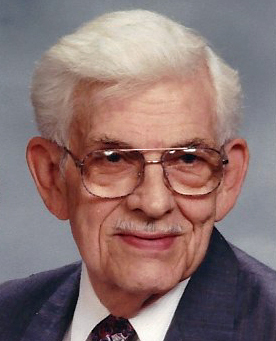 James Earl King passed away at Aspen Grove Senior Community in Lambertville, MI on Thursday, December 29, 2016 at the age of 93. He was born in Toledo, OH on December 6, 1923 to George Louis and Lottie Elizabeth (Morgan) King.

He graduated from Woodward High School and served in WWII in the U.S. Navy as a machinist mate on the aircraft carrier USS Savo Island in the South Pacific. He was a journeyman tool and die maker for the Autolite Company in the early 1950’s, then joined the Chrysler Corporation in Highland Park, MI where he remained until retirement in 1985. He liked bowling, working with his scroll saw making boxes and plaques, and especially loved golf.

Visitation will be Monday, January 2, 2017 from 4:00 p.m. until 8:00 p.m. in Urbanski’s Bedford Funeral Chapel 8300 Lewis Avenue Temperance, MI where the Funeral Service will be held Monday evening at 7:00 p.m., with Pastor, Shane Vandergrift officiating. Interment to follow at a later date.

In lieu of flowers, memorial donations may be made to Promedica Hospice or a charity of choice.

Condolences for the family may be offered online at www.bedfordfuneralchapel.com .