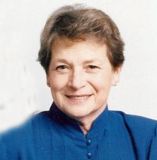 Margaret  Long Osgood, age 91 of Lambertville, Michigan passed away peacefully on Monday April 4, 2016 in Vibrant Life Senior Living. The daughter of  the Rev. James and Bess (Nye) Long, she was born August 1, 1924 in Indianapolis, Indiana.

Maggi was a student of  the Dayton Art Institute from an early childhood through high school.

She graduated from Sidney High School (Ohio) in 1942 and worked in a war plant during World War II. She graduated from the University of Michigan in 1949 and worked in Mainz Germany doing reconstruction work that summer. After 3 years of Graduate studies at the University of Chicago, she wed William Matthews in 1953 and worked for two architectural design and construction firms in Galesburg, Illinois. She returned to graduate school for a degree in Art and Architectural History in 1966 and taught at Monmouth College (Illinois)

Architectural Design for the Monarch Machine Tool Company called her back to Sidney, Ohio for eleven years before leaving the practice to wed Harold Osgood of Rockville, Maryland. There she did volunteer work for Community Ministries of Rockville. Harold and Margaret moved to Lambertville in 2002 and are members of Erie United Methodist Church.

A Memorial gathering will be held Saturday,  April 9, 2016 from 10:00 a.m until 11:00 a.m. in the Urbanski’s Bedford Funeral Chapel 8300 Lewis Avenue Temperance, MI. where a memorial service will be held at 11:00 a.m. Cremation has taken place. Donations may be made on her behalf to the Dayton Art Institute, contact Ryan Pasco, Individual Giving Coordinator, at rpasco@daytonart.org or 937-512-0139.