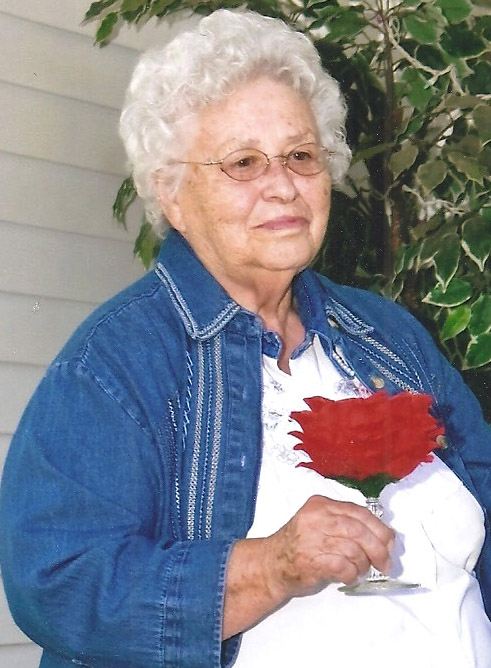 Mary Magdalene “Maggie” Clouse, age 85, of Temperance, Michigan went home to be with the Lord on Sunday, August 31, 2014.  She was surrounded by her family and friends at Toledo Hospital.  Maggie was born on September 15, 1928 in Tuscumbia, Alabama to Mary Elizabeth Smelser and Arthur Taylor.

She married Floyd Clouse of Sparta, Tennessee on July 28, 1946. She was a member of the Echo Meadows Church of Christ for more than 60 years. Maggie loved to garden and would grow the most bountiful vegetable gardens sharing her harvest with family and friends. She would can and freeze her vegetables and loved to cook and share her table with anyone. Her children’s friends loved to come to “Maggie’s” house because they always were welcomed with open arms and warm food. She often said her biggest goal in life was to be a good mother, and she was the best.
Maggie is survived by her children: Don (Vicki), Joyce (Roger) Bitikofer, Judy (Jerry) Cain, Mary Jo, Randy, Jeniece (David) Corwin, Jerri Knapp; thirteen grandchildren,: David Clouse, Julie (Matt) Cain Rennie, Joya (Jeff) Bitikofer Neal, Kristine Clouse Keller, Ryan (Michelle) Bitikofer, Jolean (Don) Cain Hatton, Jena Bitikofer, Jana Bitikofer, Daniel Corwin, Katie Clouse, Jacy Knapp, Janae Knapp, Levi Corwin and 12 great grandchildren. She was preceded in death by her husband, Floyd, two brothers, one sister, and one son, Douglas.
Visitation will be Friday, September 5, 2014 from 2 PM until 8 PM in Urbanski’s Bedford Funeral Chapel 8300 Lewis Avenue Temperance, MI where the Funeral Service will be held Saturday, September 6, 2014 at 10 AM. Burial will follow in Ottawa Hills Memorial Park.
Feel free to bring a rose to add to Maggie’s remembrance bouquet. Friends may make a donation to Echo Meadows Church of Christ, 2905 Starr Avenue, Oregon, Ohio 43616. Online condolences may be shared at www.bedfordfuneralchapel.com.