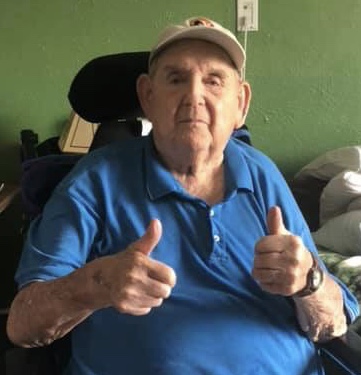 Richard L. Berning, 93 years, of Lambertville, MI passed away peacefully on March 2, 2019 in the Merit House under the care of Hospice of Northwest Ohio. The son of Leo and Anna (Schoepf) Berning he was born on August 8, 1925 in Toledo, OH.

He worked for  Libbey Glass and Coca Cola. Richard served in the United States Army during WWII. He was hospitalized for a year after being injured in Italy by German mortars and machine guns.  After being discharged he went to work for Toledo Edison working in the Line Department Appliance Repair and Storeroom. Richard married the love of his life Vivian L. Foraker on September 22, 1952. They moved to Lambertville, MI in 1963.  He joined the Bedford Township Fire Department in 1965 and retired after 25 years of service in 1990. He enjoyed traveling to Florida and watching his grandsons play baseball.

Richard is survived by his children, Janet (Denis) Slaughterbeck and Ricky (Star) Berning; grandsons, Richard, Robert and Ryan; sisters, Evelyn and Mary as well as several nieces and nephews. He was preceded in death by his parents and wife Vivian whom passed away in 2014.

The family would like to thank the staff at the Merit House for the care they gave dad and Hospice of Northwest Ohio in his final days.

Visitation will be held on Friday, March 8, 2019 from 2:00 p.m. until 8:00 p.m. in the Urbanski’s Bedford Funeral Chapel 8300 Lewis Ave Temperance, MI where the funeral service will be held on Saturday, March 9, 2019 at 11:00 a.m. Burial will follow in Whiteford Union Cemetery where Military Honors will be conducted by the Lambertville VFW Post 9656. Memorial donations may be made to Hospice of Northwest Ohio.