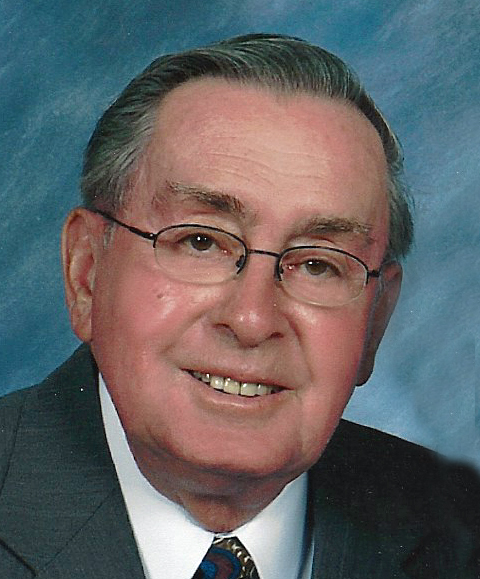 Robert L. Nusbaum, 87 years, of Temperance, MI passed away Friday, April 22, 2016 in the Toledo Hospital. He worked 34 years as a repair welder for GM Powertrain (formerly Hydra-Matic Plant), retiring in 1991. The son of Ernest and Martha (Rochowiak) Nusbaum he was born April 15, 1929 in Temperance. A 1947 graduate of Central Catholic High School, Toledo, OH, he then served 2 years in the U.S. Army.

In St. Anthony Catholic Church on January 1, 1951 he married the love of his life, Jacqueline Karpanty, with whom he spent 60 wonderful years. She preceded him in death July 16, 2011.

Bob had coached and managed Bedford 3B Boys Baseball for many years, earning a Manager of the Year Award, which he prized. He enjoyed gardening, tending his lawn and roses, wine making, his John Deere tractor, and most of all his grandchildren.

A lifelong member of St. Anthony Catholic Church in Temperance, he served as an usher for many decades. Bob was also a member of the Knights of Columbus Fr. John Kenna Council #11430, Lambertville VFW Post #9656, and American Legion Post # 192.

The family wishes to thank the staff at Hickory Ridge of Temperance and the Adult ICU and Progressive Care Unit of Promedica Toledo Hospital for their outstanding care. Memorial donations may be made to the American Cancer Society, Bedford Health Van, or Hickory Ridge of Temperance.  Online condolences may be shared at www.bedfordfuneralchapel.com .