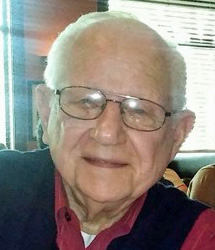 Thomas J. Bedell of Temperance, Michigan passed away peacefully on Monday January 22, 2018 at the age of 83, following a courageous 7 month battle with Cancer. Tom was born on September 14, 1934 in Flint, Michigan to Ephriam and Dorothy (Pelton) Bedell. Tom was a 1952 graduate of Flint Northern High School and served two years in the United States Army. On April 30, 1965 he married his loving wife, Beverly. Tom was employed as a manager at Grogan’s Towne Chrysler Jeep Dodge Ram for over 30 years, retiring in 2008 from an occupation he truly loved.

He was a long-time member of the Toledo Downtown Coaches and was a devoted University of Michigan football and basketball season ticket holder for many years. Tom also served on the board of Mobile Meals for 15 years and received their Spirit of Achievement Award in 2001. He had many other interests; including Golf, Fishing, and jaunts to the casino with Beverly and his many friends. Tom and Beverly also enjoyed regular trips to Las Vegas. Tom was also quite passionate about College Football. His family and many friends often would inquire; “what he thought about the latest game?” For his last 9 nine years he combined his passion, wit and knowledge to author a weekly college football blog which highlighted teams of interest throughout the college football season. His blog had a readership of nearly 100 people who eagerly awaited its release promptly at 6am each Sunday morning. Beverly, his bride of almost 53 years, and Tom raised 4 children. Over the years there were many family whiffle ball and football games. Tom was the all-time pitcher and quarterback to; son Tom (Carol); with whom he attended many Michigan home basketball and football games and traveled to places like Dallas, Madison, State College and Salt Lake City. He was Gramps to Tom and Carol’s children, Kevin, Erin, and Jordan. Son Dan (Wendy); his weekly golf competitor and partner along with who he enjoyed coveted annual fishing trips to Lake Van Ettan in Oscoda, Michigan, and Gramps to Dan and Wendy’s children; Katie Bethel (Jacob Bridges of Singer, La) and Dan Stiles. He was great Gramps to Katie’s boys Landyn, Jackson, and Griffin Carter. Daughter Sherry Cannon (Mark); who he was very proud that she followed him into the automobile business. And daughter Aimi (Allan Vierling of Elkhart, Ind); their youngest and his favorite cheerleader. (Go Panthers!) He was Gramps to Aimi’s daughter Kelsie Leigh Wilt and great Gramps to Kelsie’s son Keaton Fraley. Tom was preceded in death by his parents, sister Mony, parents in law Ralph and Nolene Roof and sister in law, Judy Jacob. He is survived by Beverly, his brother David of Flushing, Mi, his children, grandchildren, great grandchildren, 2 sisters in law and 3 brothers in law, many nieces and nephews. Tom also left behind many loyal friends.

Visitation will be Thursday, January 25, 2018 from 2 p.m. until 4 p.m. and 6 p.m. until 8 p.m. in the Urbanski’s Bedford Funeral Chapel, 8300 Lewis Ave., Temperance, MI. where funeral services will be held Friday, January 26, 2018 at 11:00 a.m.Burial will follow in Toledo Memorial Park. In lieu of flowers, the family asks for consideration to Hospice of NW Ohio and Mobile Meals of greater Toledo.