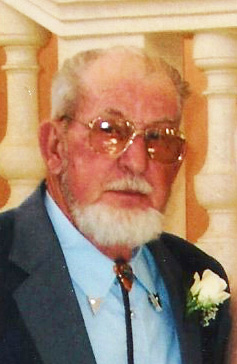 Wayne H. Raddatz 87 years of Petersburg, MI passed away Jan. 1, 2015 in the Elizabeth Scott Care Center Maumee, OH.  The son of Clarence and Helen (Marlow) Raddatz, he was born May 21, 1927 in Pemberville, Ohio.

A US Army Veteran of WWII, he was awarded the Victory Ribbon and Occupation Medal (Germany).  He worked at the former Willys Overland Company and then retired from General Mills as a boiler operator for over 37 years.  Wayne also was a farmer most of his life in the Petersburg area.  June 5, 1948 he married Joyce Marie King who preceded him in death November 1, 2010.   He also was preceded in death by his parents, children, Mark, Karl, Ruth, David and Paul Raddatz, and siblings, Leora Leduc, and Jane Evers.  He is survived by his children, Marlene (Fern) L. Heureux of Canada, Richard (Caroline) Raddatz of Utah, Henry (Denise) Raddatz of Youngstown, OH, Tim (Linda) Raddatz of Colorado, Ron (Shawna) Raddatz of Utah, Matthew Raddatz of Toledo, Marie Hayter of Toledo, 22 grandchildren, 23 great-grandchildren, and 4 great-great-grandchildren.  Friends may call Sunday January 4th from 2 till 8PM and Monday January 5th from 4 till 8PM in Urbanski’s Bedford Funeral Chapel 8300 Lewis Ave. Temperance, MI.  Funeral services will be held Tuesday at 11:00AM with interment in Toledo Memorial Park Sylvania, OH where Military Honors will be conducted  by VFW Post 9656.  A special thank you to Elizabeth Scott Nursing Home for their wonderful care and dedication to our father and a special thanks to nurses Jodi and Stella.  Memorials may be made to the Elizabeth Scott N. H. or American Cancer Society.  Online condolences may be shared at www.bedfordfuneralchapel.com .