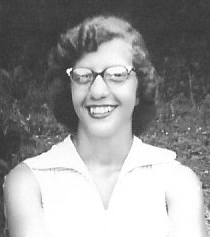 Wieck, Wilma L. (Tudy), age 78 years, of Lambertville, MI, passed peacefully on April 5, 2015 after a brief, but courageous battle with cancer. The daughter of William and Clara (Beiser) Gaiser, she was born on December 25,1936 in Bay City, MI.  She married Allen H. Wieck on June 12, 1954. They were married 51 years before his passing on April 16, 2006. Wilma was a member of Christ the King Lutheran Church in Lambertville, MI.

She was preceded in death by her parents and all nine siblings. She is survivied by her daughter, Dawn Wieck of Lambertville, MI. The family would like to thank the nursing staff at ProMedica Hospice, and her caregivers at Aspen Grove for their compassion and support.

A graveside committal service will be held on Saturday April 25, 2015 at Whiteford Union Cemetery, Lambertville, MI, at 1:00 p.m. Arrangements entrusted to Urbanski’s Bedford Funeral Chapel 8300 Lewis Avenue Temperance, MI. Memorials can be made to Christ the King Lutheran Church, American Cancer Society or a charity of your choice.