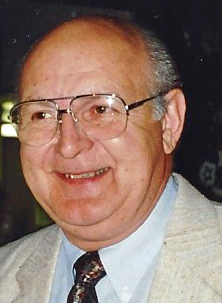 Tony retired in 2004, shortly after being diagnosed with Alzheimer’s Disease, from the company his father founded in 1941.

Born in Toledo, OH May 5, 1929 to Anthony and Martha (Wyrembek) Kujawa he graduated from Woodward High School and Davis Business College.

Tony began working with his father in the family business while still in high school and spent his entire career working at the company with his brothers, Walter, Frank and Stanley.

Under his leadership and that of his brothers, the family business grew from a small tool & die firm into a midsize metal stamping company specializing in automotive stamping and progressive die building.

Tony served in the Ohio National Guard and was called to active duty with the U.S. Army 37th Infantry Division during the Korean War.

Tony enjoyed spending time with his family and friends, collecting classic cars with his brother, Frank and attending classic car shows. He also enjoyed art, music and doing landscaping projects around his “mini farm” as he liked to call it.

where he will lie in state after 10:00 a.m. Burial will follow in Calvary Cemetery with Military Honors conducted by Lambertville VFW Post #9656.

Memorial donations may be made to the Wounded Warriors Project.