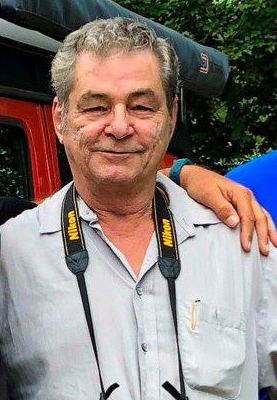 December 29, 1943 - October 6, 2022
Print
Email
Visitation
Urbanski's Bedford Funeral Chapel
8300 Lewis Ave.
Temperance, MI 48182
(734) 847-3841 |
Service
Urbanski's Bedford Funeral Chapel
8300 Lewis Ave.
Temperance, MI 48182
(734) 847-3841 |
Donald “Don” Gary Payne, 78 years, of Lambertville, MI passed away Thursday, October 6, 2022 in ProMedica Ebeid Hospice Residence, now able to rest after his battle with declining health for the past 3 months. The son of Robert Galen and Helen Ruth (Cadaret) Payne he was born December 29, 1943 in Norwalk, OH.
A U.S. Army veteran from 1962-1965, he graduated from Johannesburg High School in 1961. He spent his working career at Dana and Jeep Corporation. Don was an active member of the VFW Post 2898 on Alexis Road in Toledo where he could be found every Tuesday in his retirement.
Don enjoyed rooting the Detroit Tigers, watching westerns, catching up with family members, and all things cars. He was always looking to joke around and make people laugh. Don also had a big heart, going so far as to wander around a store until he found a family for whom he could buy Christmas gifts. Family was important to him. His grandchildren and great-grandchildren were one of the biggest joys of his life. You could see him perk up when he started to talk about the family. Even though he loved his family that never stopped him from collecting on dollar bets for things like shooting a wrapper into the trash can or football games.
He is survived by his children, Richard Harrison, Pamala Florez, Angela (Mickey) Witt, Stacy Payne, Donald (Pamala) Payne, Jr.; grandchildren, Michael, Theodore, Mason, Jason, Cory, Rowan; great-grandchildren, Shelby, Kylie, Zelda, Zander, Leonardo; a sister, Sheree (Harry) Kawapis, and brothers, James (Mayree) Payne, and Rusty (Libby) Payne.
He was preceded in death by his wife, Carol Ann Payne on December 12, 2005; a son, Steven Harrison on September 21, 2022; and his canine companions, Missy and Rickers.
Visitation will be Wednesday, October 12, 2022 from 10:00 a.m. until the time of the Funeral Service at 3:00 p.m. in the Urbanski’s Bedford Funeral Chapel 8300 Lewis Avenue Temperance, MI. Please feel free to wear Detroit Tigers apparel or Hawaiian shirts to the Service. Burial will follow in Whiteford Union cemetery with Military Honors conducted by Lambertville VFW Post 9656. Wake to follow at VFW 2898 on Alexis Rd.
Donald’s favorite saying was “I don’t drink water, that’s a dogs drink” when he was offered water.
“What you leave behind is not what is engraved in stone monuments but what is woven into the lives of others.”-Thucydides