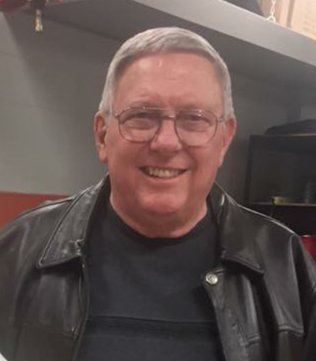 Jerry Nemire, 71, of Erie, MI passed away peacefully in his home on Tuesday, May 16, 2017, surrounded by the love of his family, following a 15-year battle with cancer.  He was born January 24, 1946 in Toledo, OH.  He was the son of Kenneth Nemire and Virginia (Goodremont) Nemire- Shaffer, and stepfather of 44 years, Murray Shaffer.  He graduated from Whitmer High School in 1964.  He was a loyal and devoted husband, marrying Judy (Sabin) Nemire on February 20, 1965, recently celebrating 52 years of marriage.  Jerry and Judy were inseparable and their lives were spent enjoying their common love of family, racing, and classic cars. Together they were blessed with three children and four grandchildren.

Jerry was a member of the Robinson Locke Lodge No. 659, F.& A.M. and also a member of the Zenobia Shrine.  He had 42 years of service with the International Union of Operating Engineers, Local 18.  He was a retired crane operator, employed by Jeffers Crane Service and Gurtzweiler. Jerry spent many years self-employed with Nemire Enterprises, crafting his hobby of mechanics and machinery.  He had a special knack for looking at something and knowing exactly what needed to be done to fix or design it.  People from all over would bring things to Jerry, whether it was to repair or weld a broken part, fabricate a new replacement piece, or build an engine.  Whatever it was, Jerry was known to fix it and was admired by many for his talents. He was a certified mechanic and built many of his own racecars and engines, with many more hidden talents.  He was also one of the first to help build and develop the ARCA Truck for the ARCA Truck Racing Series in in 1999.

Jerry was well known for his racing career following in the footsteps of his late father, Kenneth Nemire, who was killed at Raceway Park in 1957.  Jerry started his racing career in 1967, first racing Figure 8 cars at Toledo Speedway, followed by stock cars. He had his first open wheel start at Fremont Speedway, racing an old Crosley.  He fabricated and built his first racecar at the age of 24.  Nemire continued open wheel racing where he drove sprint, midget, and dirt champ cars.  He spent 40 years driving with the USAC, World of Outlaws, and ARCA series where he raced alongside many great drivers such as AJ Foyt, Tony Stewart, Ryan Newman, and Toledo’s USAC champion, Rollie Beale.

Jerry received many honors during his racing career. He was Rookie of the Hoosier 100 at Indianapolis in 1981 and won the 1997 ARCA Midget Series Championship,  alongside his sons and friend Joe Yager. He was honored at the Toledo Speedway in 2011 for his long history, dedication, and accomplishments in racing. He was also on the Racing Board of ARCA as commissioner for racing appeals.   Most recently in the week preceding his death, he was inducted into the Fremont Race Car Hall of Fame, along with his late father, Kenneth Nemire. This honor meant a great deal to him, bringing his racing career full circle.

Following his racing career, Jerry embraced his love of classic cars, sparked by his step-father and friend, Murray Shaffer.   He owned seven classic cars ranging in years from 1940 to 1965 and received many first place awards. He then went on to serve as President of the former Placers Car Club for 4 years.  In 2010, Jerry was recognized for building  “The Best Flathead Motor” by the Old School Flathead Association.  He also received the Lifetime Achievement Award from the Toledo Area Street Rodders for his overall dedication and career in automotive mechanics, racing, fabrication, building/design, and restoration.   He most recently sold his prized possession to Tony Stewart, a 1974 restored AJ Foyt racecar.  Jerry and Stewart had a shared appreciation for the car’s history.  It will be displayed at race museums throughout the country for race fans to enjoy.

Jerry is preceded in death by his parents, Kenneth Nemire, Virginia  (Nemire) and Murray Shaffer, and daughter-in-law, Laura Nemire.  He is survived by his wife, Judy (Sabin) Nemire, children JD Nemire (Rachel Michalak), Kenny Nemire, and Tammy (Chad) Garrison; grandchildren, Austin and Aubrey Nemire and Alex and Kelly Garrison; and many devoted family and friends.

The family would like to express their gratitude to Jerry’s cardiologist, Dr. William Schafer and his staff for their friendship and commitment to his care.  Also, a special thanks to his oncologist, Dr. Rex Mowat and the oncology nurses at the Toledo Clinic for their compassionate care during this long battle.  In addition, the family would like to extend their appreciation to Hospice of Northwest Ohio.

In lieu of flowers, memorials can be made to the Shriners Children’s Hospital, The American Cancer Society, or Hospice of Northwest Ohio.