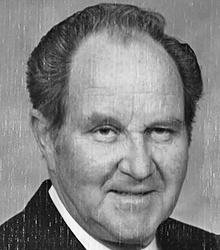 Joe was a 1947 graduate of Burnham High School in Sylvania. He served in the U.S. Army from 1951 to 1953 during the Korean Conflict, and was stationed in Washington D.C.

Joe worked 5 years at Toledo Jeep, 27 years with Gulf Oil Corporation and 11 years as a rural letter carrier at the Temperance Post Office. Initially while at the post office as a substitute carrier, he also worked 2 years for Sharon Manufacturing. He went on to work full time with the U.S. Postal Service, ultimately retiring in 1994. From 1960 to 1977, the family also operated a produce stand in front of their home on Talmadge Road in Toledo, while simultaneously employed with Gulf Oil Corporation. Joe was transferred to Philadelphia, PA in 1977, at which time they had to give up the family produce business.

Upon his retirement from Gulf Oil in 1981, they returned to Temperance, MI, where he continued to enjoy farming on their 15 acres. Tractors were Joe’s hobby and passion. During this time, he has been an active member of Our Lady of Mt. Carmel Church in Temperance.

Joe is also survived by their 28 grandchildren; 40 great-grandchildren, with two on the way.

Joe was the second in a family of seven. Other surviving family members include his brothers, Gerald (Ellen) Keeler, and Robert (Sandra) Keeler; sister-in-law, Justine Keeler, and many nieces and nephews.

His neighbors always enjoyed his lawn and garden expertise. Joe was an avid Indian’s fan, rarely missing the chance to watch or listen to their games. He enjoyed playing softball with family and was always up to a good practical joke with his favorite pet, “”the flipdigger.””

Visitation will be held on Tuesday, August 5, 2014, from 2 p.m. until 8 p.m. at Urbanski’s Bedford Funeral Chapel, 8300 Lewis Avenue, Temperance, Michigan. The Funeral Mass will take place at 11 a.m. on Wednesday, August 6, 2014, at Our Lady of Mt. Carmel Church, Temperance, where the family will greet guests one hour prior to the Mass. Burial will take place at St. Mary’s of Assumption Cemetery.