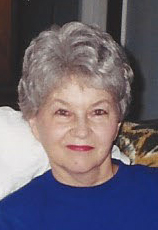 June attended the University of Toledo majoring in education. She was elected Homecoming and Sweetest Day Queen, was a member of the Tri Deltas and went on to become a teacher and homemaker. She had a deep and enduring faith in God and it showed in every aspect of her life.

June was preceded in death by her husband, John “”Jack”” Stalder; son, Bill Heidtman, grandson, Michael Heidtman, and brothers and a sister. She is survived by her children, Tom (Cammie) Heidtman, Linda Heidtman, Jeff Heidtman; and many grandchildren.

Visitation will be Monday, June 15, 2015 from 11 a.m. until the time of the Funeral Service at 1:00 p.m. in Urbanski’s Bedford Funeral Chapel 8300 Lewis Avenue Temperance, MI. Cremation will follow.

Donations are preferred to Shelton Park Church of God.