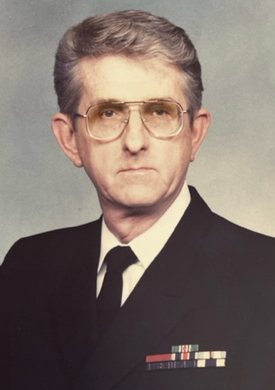 Lawrence A. Bialecki, 84 years, of Lambertville, MI passed away Thursday, February 17, 2022 in Ebeid Hospice, Sylvania, OH. The son of Francis and Mary Catherine (Rahilly) Bialecki, he was born August 8, 1937 in Toledo, OH.

A graduate of Woodward High School, Larry bucked family tradition and enlisted in the U.S. Navy, rather than going to work in a factory.

Following his 4-year tour of duty in the Navy, he entered the U.S. Naval Reserves, and worked his way as a mustang up to the rank of Captain, retiring in 1991. Although extremely proud of his naval career, Larry was “all things Navy”, he was most proud of his family. He instilled in them a love and respect of each other, of God, and of country.

Larry retired in 1996 after decades of working in personnel management and as a steel salesman.

He enjoyed being surrounded by his family at get-togethers, birthday celebrations and holidays. He also liked to play golf, work on home improvement projects and was proud of his membership involvement with the Knights of Columbus #8902 at Our Lady of Mt. Carmel Catholic Church.

He was preceded in death by his parents, step-mother, Helen Bialecki; brothers, Frank and Don Bialecki; and sisters, Bea Hartman and Charlotte Sickelbaugh.

Visitation will be Thursday, February 24, 2022 from 5:00 p.m. until 8:00 p.m. in the Urbanski’s Bedford Funeral Chapel 8300 Lewis Avenue Temperance, MI. The funeral mass will be celebrated Friday, February 25, 2022 at 11:00 a.m. in Our Lady of Mt. Carmel Catholic Church, Temperance where he will lie in state in the narthex after 10:00 a.m. Burial will follow in the church cemetery with Military Honors conducted by Lambertville VFW Post #9656.