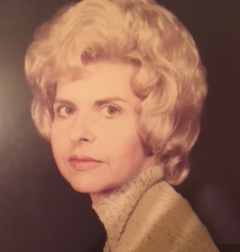 Margaret “”Joanna”” Sisco Henry passed away on Wednesday, December 13, 2017 in the Kingston Residence after a two year battle with brain and lung cancer. Margaret was born to William J. and Cleo Harris  on September 10, 1934 in Oxford, AL. She was one of seven children.

After skipping two years of school, at the age of 16 she lied about her age and got a job on Fort McClellan Army Air Field. Some of her happiest years were spent at Fort McClellan where she was a Librarian and this started her government career. There she met her husband Herbert and had a son Herbert III.  After his death she went to Washington D.C and worked as an executive secretary in the Pentagon. Returning to Georgia, she opened an antique store and loved buying many beautiful pieces. While living in Atlanta, GA she met Allan Henry. They married and moved back to Monroe, MI in 1984. They would have celebrated their 33rd wedding anniversary on December 14. Allan passed away on November 20, 2017.

A private celebration of life will be held on December 20, 2017. Donations can be made to St. Jude’s Children Research Hospital. Funeral arrangements entrusted to the Urbanski’s Bedford Funeral Chapel, 8300 Lewis Ave Temperance, MI 48182.