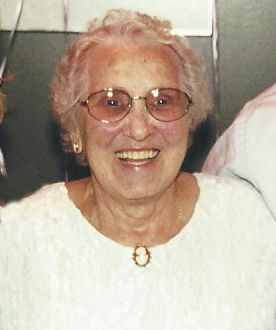 Mary Alyne “”Chris”” Sutkus, 97 years, of Sylvania, OH passed away October 31, 2017 at Kingston Residence of Sylvania. The daughter of Jesse and Irene (Willard) Christman, She was born on August 21, 1920 in Toledo, OH.Mary Alyne was a loving wife to George whom she married on April 19, 1941, mother and grandmother.  She had a musical family and all were blessed with beautiful voices. As her mother played the grand piano, the grown siblings, along with other family members, gathered around and sang both spiritual and popular songs.

This was done on many Sundays while their father used his culinary skills to cook a hearty meal for all. A very hospitable and generous woman, Mary Alyne also helped raise her siblings when her mother became very ill. After selling her home in Ohio she moved to Temperance Michigan.   Then, for 14 years, Mary Alyne enjoyed a very happy life at Moongate Independent Living and, therefore, the family gives a special thank you to Dan and Colleen.

Visitation will be Friday, November 10, 2017 from 2:00 p.m. until 8:00 p.m. in the Urbanski’s Bedford Funeral Chapel, 8300 Lewis Ave Temperance, MI. where the funeral service will be held on Saturday, November 11, 2017 at 11:00 a.m. Burial will follow in Ottawa Hills Memorial Park Cemetery, Toledo, OH. In Lieu of flowers, memorial donations may be made to Hospice of Northwest Ohio, 30000 East River Road Perrysburg, OH 43551 or to The Little Sisters of the Poor,  930 South Wynn Road Oregon, OH 43616. Online condolences may be shared at www.bedfordfuneralchapel.com.