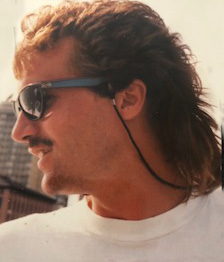 Randall “”Randy”” Hugh Alcorn was born on March 18, 1960 in Monroe, MI. He was the loving and devoted son of J. Houston and Ruby Jean (Roberts) Alcorn. Randy unexpectedly passed from this life on Thursday, January 17, 2019.

Randy grew up in Temperance, MI. He graduated from Bedford High School in 1978. He married his wife Brenda in a beautiful outdoor ceremony on July 6, 1991.  They built their home in Ida, MI. Together they raised their two children, Justin Dow and Ashley Leann Alcorn.  He was employed by the Jeep Corp. for 30 years retiring in 2009. He then worked in the trades, installing carpets, flooring and home remodeling.

Randy lived his life to the fullest. His love for adventure took him all over the country. He was an avid boater, water skier and snow skier.  He could often be found cruising Lake Erie on his “Stinger” boat or flying down the steepest ski slopes. His most recent adventure took him on a memorable trip to ski with his wife and children in Colorado. His love of adventure was only surpassed by his love for his family.