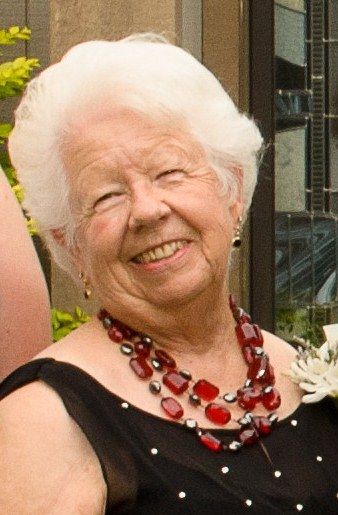 Ruth Alice Schneider (Sheldon), 83 years, of Blissfield, MI passed away on September 3, 2016 in the Saline Evangelical Home surrounded by her family.  The daughter of Ithamer and Loa (Clough) Sheldon, she was born on September 13, 1932 in Palmyra, MI.  A loving mother, her greatest joy in life was being with her family.  Ruth is a graduate of Blissfield High School and attended Lenawee County Normal.  April 9, 1952 she married Leonard J. Schneider, he preceded her in death in 1993.

Ruth worked at Just Rite Bakery until the age of 22.  She then worked for Brockway Photography and Kohlman International all while selling Avon for over 20 years.  Ruth worked as a bookkeeper for Knapp Motors for over 15 years retiring in 1997.  After retiring she volunteered for Hospice of Lenawee County for 15 years.  She was a member of Trinity Lutheran Church in Riga.  Ruth very much enjoyed meeting with her “Lunch Bunch” for their monthly meetings.  She was a member of the Maple City Swingers Square Dancing Club  and a member of the Lenawee County Historical Society.  Ruth loved to crochet for her family and was famous for her peanut brittle and chocolate chip cookies.

Visitation will be held on Wednesday, September 7, 2016 from 2 p.m. until 8 p.m. in the Urbanski’s Bedford Funeral Chapel 8300 Lewis Avenue Temperance, MI. Visitation will also be held on Thursday, September 8, 2016 at 9 a.m. until 11a.m. with Funeral Service at 11 a.m. in Trinity Lutheran Church 7623 Riga Hwy. Riga, MI.  Burial will follow in Pleasant View Cemetery, Blissfield, MI.

In memory of Ruth, memorials may be made to Trinity Lutheran Church of Riga, MI or Hospice of Lenawee County.  Online condolences may be shared at www.bedfordfuneralchapel.com.