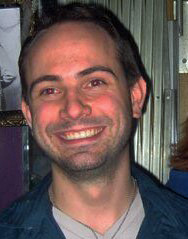 Ryan Anthony Reynolds, 36 years, of Temperance, MI passed away unexpectedly on August 16, 2019 in Toledo, OH. The son of  Terrance Reynolds and Sharon (Fry) Angerer he was born on April 14, 1983 in Toledo, OH.

Ryan graduated from Bedford High School in 2001. He was involved in marching band and theater. After high school he became a CMT certified massage therapist at The Nevada School for Massage Therapy working at Body Work 4 Health.

Ryan endured numerous surgeries over 15 years dealing with Crohn’s Disease. He lived life to the fullest when he was well and out of the hospital. Our family would like to thank the numerous Drs., nurses and surgeons who helped Ryan along his journey at Cleveland Clinic, Toledo Hospital and UTMC.

His interests included traveling, theater, music, computers, Science Fiction (especially Star Trek), gaming and hanging out with family and friends. Ryan’s favorite trip was spending time with his mom in Las Vegas and attending the shows.

A Celebration of Life will be held on September 22, 2019 at The Bay View Yacht Club 3902 N. Summit Street Toledo, OH from 12:00 p.m. until 3:00 p.m.  Funeral arrangements were entrusted to the Urbanski’s Bedford Funeral Chapel 8300 Lewis Ave Temperance, MI. We will forever miss Ryan in our lives!